It’s been very many years since I read a science fiction book, but I remember that scientist and sci-fi master Isaac Asimov always said that he would not write anything which was not possible within our understanding of science — there had to be a sound underpinning of physics, chemistry and biology to everything he wrote. Bob Rich has followed the same path of scientific integrity.

The basic premise of the book is that Flora Fielding, a fabulously wealthy, beautiful and successful actress is terminally ill with cancer and goes into cryogenic storage, (deep frozen suspended animation), to await the cure that the research she had funded was sure to find within the next few years, allowing her to return to essentially the same world that she suspended and continue with her life and career. When she is finally woken up it is 1433 years later and the world is a very different place, following ‘The Cataclysm’ and subsequent chaos. The Cataclysm happened when geological surveys and climate change combined to cause the Ross Ice Shelf to detach and send a 200m high wave around the world, killing most of the land life and certainly all of that below about 300m above our current sea level. The survivors have built a utopian world, governed by a single council, and with the global population limited to one million — and so strictly that one person has to die before another can be born.

At one level, this is a straightforward sci-fi novel and it is an entertaining and worthwhile read at that level but it is also so much more. Rich introduces ethical dilemmas that have to be considered and resolved by the protagonists; he takes a gentle swipe at our current values, in that the only two sleepers we meet from 1433 years ago are wealthy enough to be frozen, and thereby challenge the mortality faced by every other person on the planet, by either celebrity (Flora) or exploitation of planetary resources (Marcel, the geologist whose explorations led to The Cataclysm); above all else, he leaves us wondering who are the sleepers who need to awake? Are they the apparent subjects of this novel or are they the majority of the population of this planet, who are sleepwalking their way towards global catastrophe by continuing with their usual behaviour in the face of overwhelming evidence of human-caused climate change? Sleepers, Awake! 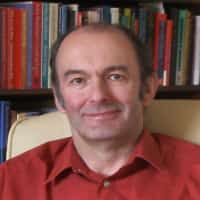 Dr Carl Stonier is one of the major contributors to Cancer: A personal challenge, but his expertise doesn’t stop with supporting cancer victims. If you want to be impressed, spend a minute or so to read his many credentials. For decades, Carl has worked to improve society, and to reduce suffering, following Mother Teresa’s advice: “Help one person at a time, and start with the one closest to you.”

I am a professional grandfather. My main motivation is to transform society to create a sustainable world in which my grandchildren and their grandchildren in perpetuity can have a life, and a life worth living. This means reversing environmental idiocy that's now threatening us with extinction, and replacing culture of greed and conflict with one of compassion and cooperation.
View all posts by Dr Bob Rich →
This entry was posted in Climate change, reviews. Bookmark the permalink.